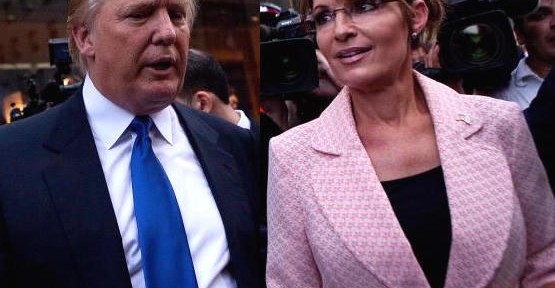 Sarah Palin was slated to appear at Donald Trump‘s Wednesday morning rally in Norwalk, Iowa, but the former GOP vice presidential candidate was a no-show.

Despite a press release touting her appearance, Palin was painfully absent. Some say the cancellation was due Track Palin’s arrest for domestic abuse, while others maintain Sarah was booted after a her eccentric Trump endorsement speech. The Trump campaign has refused to explain Palin’s absence, even going so far as to tell CNN, “Did it say she was going on stage?” Could Palin’s non-appearance be tied to her son Track’s arrest less than 24 hours before she endorsed Trump? Was Trump so aghast at Palin’s gut-punching word salad of a speech Tuesday that she was kept offstage until she could get it together? h/t thenewcivilrightsmovement

The Trump “campaign reportedly confirmed to ABC that ‘Palin will be in Tulsa, OK and will take the stage with Trump there.'”