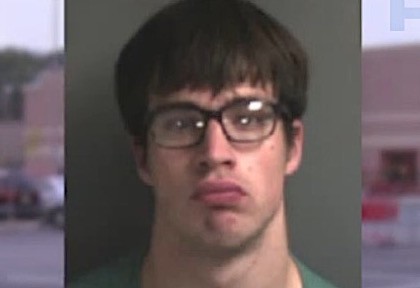 Nathan Glenville, a Target employee, allegedly thought his co-worker looked a lot like Margot Kidder, who played Lois Lane in the 70s Superman movie. The female co-worker disagreed and promptly complained to supervisors.

Glenville, 21, was disciplined a few days after the incident, and then a few days later he crashed his car into the front of the store, after bragging about doing “something big” on his Facebook page. Moments after allegedly posting threatening messages on Facebook, security cameras show the car crashing through the glass doors of the store. Glenville then busted his car window, climbed out, but then fell upside down into a shopping cart as he tried to walk away. He struggles for a few minutes, reached in his car, and then stumbles out of frame. Luckily, no one was hurt. h/t pix11

Glenville fled the scene, but was later located by police. The store estimates he caused at least $20,000 in damage.