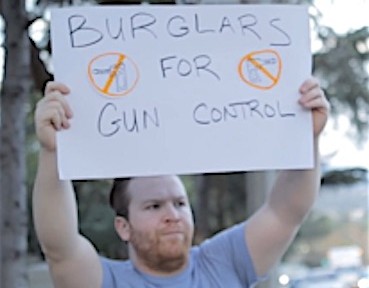 Via TheBlaze: “Burglars for Gun Control,” a video skewering those against the Second Amendment when used by homeowners protecting themselves and their families, has just been released by a west coast comedy group, We The Internet.

Resembling a local television news video, the clip tells the story of two would-be burglars who encounter an armed homeowner. The incident ends badly for one of the robbers, as the homeowner shoots and kills him after first calling 911 and warning the bad guys she’s armed and willing to shoot to protect herself and her child.

The fake news clip depicts the surviving robber as a “Concerned Citizen” who ultimately becomes an anti-gun activist, telling the camera, “As long as law-abiding citizens have guns, it’s that much harder for burglars like me to do my job.”