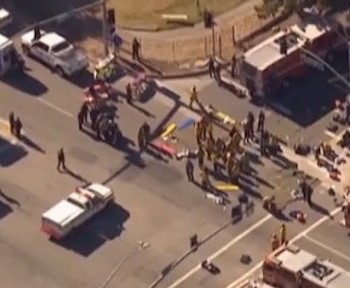 Police scanner reports one of the suspect’s names in the San Bernardino mass shooting as Farooq Saeed.

14 are reportedly dead and are 14 wounded. Three killers are still at large. “They came here as if they were on a mission,” said the San Bernardino police chief. Riverside police dispatchers have broadcast a general advisory that the suspects involved in the shootings in San Bernardino may have fled in a black GMC Yukon, heading northbound on Waterman Avenue, roughly 40 minutes ago. The broadcast was part of a region-wide alert issued by the San Bernardino Police Department. h/t pamelageller

The broadcast indicated there were unconfirmed reports the suspects were male and of Middle Eastern origin, “armed with AK-47s and wearing body armor.”

Breaking reports say police are currently in a dramatic shoot out with a suspect, who may be “down.”