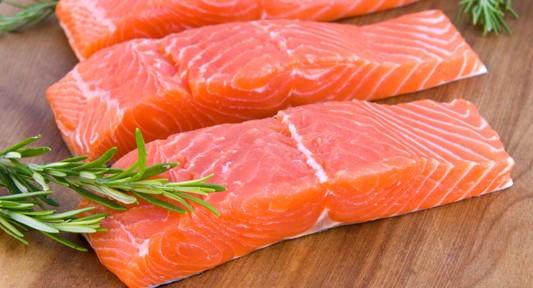 That Alaskan wild salmon you just dined on at a restaurant or picked up at your local supermarket to enjoy at home, was most likely fake, according to a new report from the nonprofit Oceana. The stunning report reveals that salmon products labeled “wild,” and “Alaskan wild,” were often in reality farmed Atlantic salmon.

The nonprofit organization gathered 82 salmon samples from restaurants and grocery stores between December 2013 and March 2014 and found that 43 percent were mislabeled. DNA testing confirmed that the majority of the mislabeling (69 percent) consisted of farmed Atlantic salmon being sold as a wild-caught product. “Americans might love salmon, but as our study reveals, they may be falling victim to a bait and switch,” said Beth Lowell, senior campaign director at Oceana. “When consumers opt for wild-caught U.S. salmon, they don’t expect to get a farmed or lower-value product of questionable origins. This type of seafood fraud can have serious ecological and economic consequences. Not only are consumers getting ripped off, but responsible U.S. fishermen are being cheated when fraudulent products lower the price for their hard-won catch.” h/t eatlocalgrown