Gwen Stefani Sings “Used To Love You” On Ellen: Days After Divorce Settlement 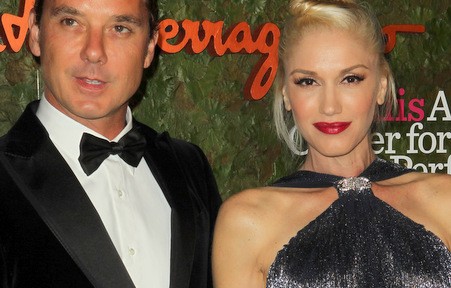 Gwen Stefani performed her new song “Used to Love You” on the Ellen show on Monday, which is obviously about her divorce from singer Gavin Rossdale.

The 46-year-old beauty performed the track that details her heartache over their split. The performance comes days after Gwen and Gavin settled their divorce. The stunning blonde showed off electric blue dip-dyed hair, debuting the rather painful song about her marital breakdown.

Stefani showed off her slender figure during her song debut in a white wife-beater over a yellow bra. She wore cropped and distressed jeans, paired with sexy red boots.

The No Doubt singer appeared to be a little emotional, singing the lyrics, “You go, I’ll stay, you can keep all the memories. I thought I was the best thing that ever happened to you, I thought you loved me the most”.

Gwen’s appearance comes on the heels of her divorce settlement with Bush frontman, Gavin Rossdale. The couple agreed they would share custody of their three sons – Kingston, Zuma, and Apollo.

There are reports that Stefani and Rossdale did not have a prenup agreement in place before getting married, but Gavin agreed to take less than half of his share of community property.

California law entitles each of the spouses to half of their fortune, but Gavin made the decision to help speed along the finalizing of the divorce.

The couple should be legally divorced by the end of the year, after the judge signs off on everything. The singing couple started dating back in 1995, when No Doubt opened for Gavin’s band Bush on tour.

Rumors had swirled that there were problems in their marriage for years, with Rossdale being accused of cheating. Not only cheating, but with a male cross-dresser named Marilyn.

In August, the couple confirmed their marriage was over.

Gavin and Gwen issued a joint statement, saying, “While the two of us have come to the mutual decision that we will no longer be partners in marriage, we remain partners in parenthood and are committed to jointly raising our three sons in a happy and healthy environment.”

Gwen’s The Voice co-star Adam Levine shared a cute Instagram photo of himself posing with Blake Shelton and Stefani on Sunday. He added the caption, “#family #blakeisthestepbrother.” There have been rumors swirling that Blake and Gwen hit it off, after bonding over their marital splits.

On Tuesday, Gwen Stefani appeared a little shocked when Matt Lauer asked if her new song was about Gavin and their split on the Today Show.

Stefani admitted, “I wrote that song a couple weeks ago. I sat in front of a camera in a dressing room randomly – not to make a video just to do some background video. It’s all very real”.