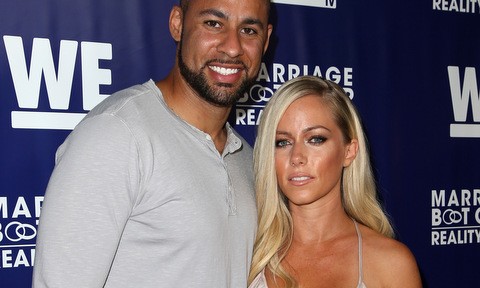 An insider claims that Kendra mocks Hank and is “repulsed” by him.

Kendra and Hank have two children together – Hank Jr., 5, and a 17-month-old daughter named Alijah.

“Kendra told Hank she wants a divorce because she can’t stand to look at him anymore,” a source revealed.

The source adds, “She’s going to leave him. Kendra is done.” An insider with Kendra On Top said, “Kendra rants every day on the set of her show about how she hates Hank and how desperate she is to get rid of him. She thought she would be be able to handle that he cheated with a transsexual. But she’s still absolutely repulsed by what he did – it makes her sick – and she knows now that she’ll never get past it.”

There were previous reports that Kendra Wilkinson had been contacting her former boyfriend, Shawne Merriman, 31, who she dated right before Hank.

The reality show source added, “She’s ready to live her life as a single woman. She keeps saying, ‘There must be someone better out there for me.'”

There have been rumors that the events leading up to the divorce will be filmed for their reality show. Keeping it classy!