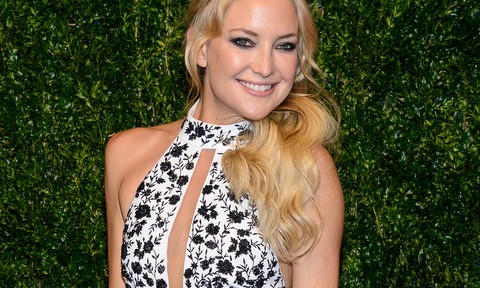 Kate Hudson appeared alongside Zoey Deschanel on “Watch What Happens Live”, where the blonde beauty was questioned her rumored romance with singer Nick Jonas.

Bravo host Andy Cohen was delighted when a caller asked Kate, “Are the rumors true that you’re dating Nick Jonas?” Cohen was dying to find out if the hook-up rumors were true, stating, “Number one – this is all I wanna know!”

Kate was obviously nervous and blushed as she attempted to avoid answering the personal question.

Andy told Kate, “Here’s my feeling. You are so hot, I’ve seen you in person now a couple of times, and Nick Jonas has been here a couple of times, he’s so hot…I love it when hot people are together. It’s my favorite thing! I hope something’s happening – even if it’s casual”.

The 36-year-old actress refused to discuss the 23-year-old adorable singer.

Kate Hudson insisted, “I don’t… I don’t like addressing any kind of gossip, no”.

Andy was so excited about the prospect of Kate and Nick dating, adding, “I just want to reiterate that it is my wish for you for that to happen in some capacity.” Hudson smiled and took a sip of her drink, replying, “I’ll keep that in the back of my mind.” Andy did pry a few confessions out of Kate and Zoey Deschanel, who were friends in high school and co-starred in Almost Famous together, in a little game he called Dish In The Dark – Never Have I Ever.

Kate and Zooey were asked questions including whether they’ve ever given out a fake phone number and if they’ve smoked weed with a family member.

Kate and Zoey are starring together again in the film “Rock The Kasbah”.