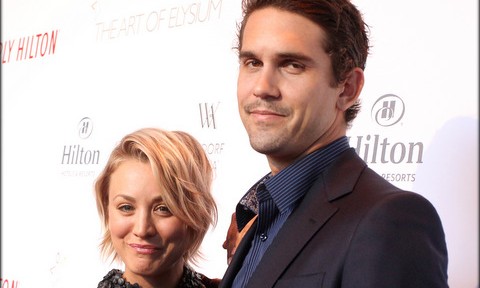 Cuoco married Sweeting on New Year’s Eve in 2013 after a whirlwind romance of only three months. The actress filed for divorce from the athlete last month, reportedly over his painkiller addiction. The 29-year-old actress did have a prenuptial agreement in place. Kaley is worth an estimated $45 million, while Ryan is worth around $2 million.

Despite the prenup agreement, Sweeting is still asking for spousal support.

There have been reports that the actress made the decision to end her marriage due to the tennis star’s addiction to painkillers prescribed to him after back surgery.

An insider told Us Weekly, “She supported him, but she said he couldn’t make the commitment to get sober. He’d tell her he was working on it, and instead go get wasted.”

Ryan, 29, once was a very respected professional tennis player, ranking at 64 in the world. Sweeting was previously arrested for DUI and drug possession in 2006, charged with the intent to sell.

Just a few months after Kaley Cuoco and Ryan Sweeting tied the knot, he suffered a back injury and became hooked on the painkillers his doctor prescribed.

The prescription pain killer addiction reports have been swirling, but there were also rumors Kaley’s split was caused by her relationship with her “Big Bang Theory” co-star Johnny Galecki.

Cuoco has slammed the romance reports with her co-star, taking to Instagram to address the reports.

Kaley posted on social media, “So sorry to disappoint, but no home wreckers or secret flings going on here. Me and @sanctionedjohnnygalecki are just the best of buds — Leonard and Penny will just have to suffice!” Did Kaley and Ryan get married too quickly? Three months certainly doesn’t seem long enough to really get to know someone.

Kaley previously stated she just knew he was “the one”, explaining that the relationship happened fast but that’s just how she rolls.