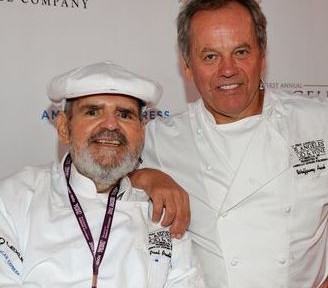 Paul Prudhomme, the superstar Cajun and Creole chef and restaurateur who built a retail spice empire, has died. He was 75.

Prudhomme started a Cajun cooking craze in the 1980s, and was also owner of restaurant, K-Paul’s Louisiana Kitchen. His “Magic” brand of seasoning blends can be found on store shelves worldwide. The restaurant opened in the French Quarter in 1979, taking part of his name and that of his late wife,Kay Hinrichs Prudhomme. But Prudhomme first gained fame in New Orleans as the chef at Commander’s Palace, where he, Ella and Dick Brennan revolutionized Creole cuisine. He became executive chef there in 1975, turning the landmark restaurant into a national treasure. Prudhomme wrote 9 cookbooks over the years and hosted five national cooking shows on PBS, which were produced locally by WYES-TV and remain viewer favorites here and across the country. h/t wwltv

Prudhomme’s death was confirmed by his restaurant, K-Paul’s Louisiana Kitchen. A representative said the chef died after a brief illness.