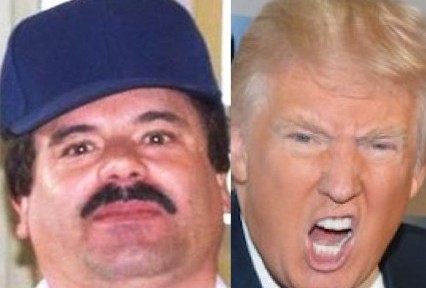 Joaquin Guzman aka El Chapo recently promised that he would make Donald Trump “swallow his words,” and now the Mexican drug lord is putting his money where his druggy mouth is.

The Shorty has officially placed a bounty on Trump’s head to the tune of $100 million to anyone who can take the Presidential candidate out. And when we say “out,” we don’t mean of the race. Bad move El Chapo. Trump has been heavily pushing his agenda to remove illegal Mexican immigrants, saying he plans to deport those without legal papers. He says he will allow “the good ones” to reenter America eventually. “Politicians aren’t going to find them because they have no clue. We will find them, we will get them out,” he said. El Chapo heard of Trump’s words towards the Mexican people while in prison, and was furious with the rapists and criminal accusations. Sources say the drug lord was plotting Donald’s death with cellmates before he escaped imprisonment. h/t todaysaweinspiringpictures

The extremely rich drug dealer says he will reward $100 million to the person who can bring Trump to him dead or alive. Back in July, Trump was reported to have contacted the FBI over the El Chapo threat.