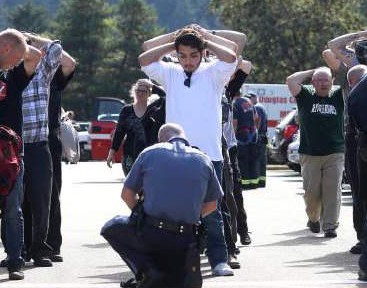 Reminiscent of recent Islamic attacks, the Oregon College shooter also asked the victims to state their religion, reports from the scene say.

The same scenario played out in the Tunisian beach massacre, where victims were asked to state their religions and then non-Muslims were killed. Kortney Moore, an 18-year-old student at Umpqua Community College told the News Review she was sitting in her writing class when a bullet blasted through the window. She saw her teacher shot in the head then noticed that the shooter was in the classroom. Moore said the shooter told people to get on the ground. He then asked people to stand up and state their religion but started firing anywhere. She was on the ground next to people who’d been shot. h/t pamelageller / photos nrtoday

The official death count stands at 13.