The Rock’s Heartbreaking News: I Had To Put Down My Pup Brutus 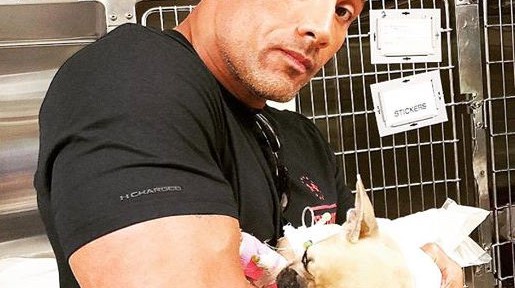 Just a few weeks after telling fans on social media that he successfully rescued his pup from the pool, Dwayne ‘The Rock’ Johnson announced some heartbreaking news on his Facebook page on Tuesday.

Johnson revealed that he had to put down his French bulldog Brutus after the dog consumed a poisonous mushroom. “Another reminder we have to live and love as greatly as we can today, because tomorrow is never guaranteed.
At approximately 11:15pm last night myself and Lauren Hashian Officialhad to make the painful decision to end Brutus’ suffering by taking him off of life support and sending his soul to pup heaven. I held his lil’ paw as he was finally at peace.

As all puppies and dogs do, he ate a mushroom while playing outside with his brother Hobbs. This mushroom happened to have a lethal toxicity and within hours it was rapidly destroying his liver and immune system to the point of no return.

I encourage all of you out there to be mindful of mushrooms in your yards, parks or anywhere outside your dogs play. What looks innocent, can be deadly to your lil’ family members.

Thank you Dr. Deckelbaum and Dr. West and the incredibly caring nurses and staff at The Animal Medical Center At Cooper City.
We’ll always love you Brutus.. and you’ll always be my lil’ main man and rough housing Brute.

‘The Rock’ has issued a warning other dog owners to be aware of mushrooms in your yards, in parks or anywhere where your beloved pup may be.