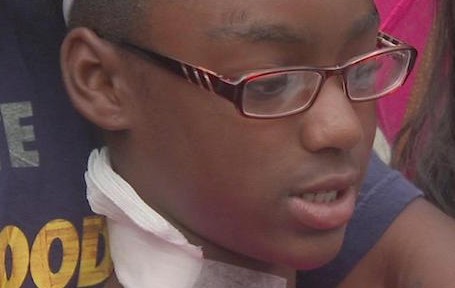 A staggering 57 people were shot over the weekend and another five on Monday in Chicago, including an infant and an 11-year-old girl. The condition of the infant was not immediately available.

Chicago police said the 11-month-old victim was shot while family sat outside a neighbor’s house in the Back of the Yards neighborhood, and 10-year-old, Melanie Irving, (pictured,) was shot in the neck in Chicago’s Woodlawn neighborhood while she was walking to her grandmother’s residence. Two Chicago police officers who responded to the scene made the split-second decision not to wait for paramedics. Instead, they put the child in the back of their squad car and rushed him to Stroger Hospital. “The police officer brought the baby in, he was holding the baby,” said Allen Florence, who witnessed the scene in the emergency room. “They was holding him real tight. You could tell right away he had been shot the way the traffic was.” Irving’s shooting occurred shortly before 1 p.m. in the 1400-block of East 66th Place in the Woodlawn neighborhood. There were several people out, including at least three children, and while only one appears to have been the target, two innocent victims, including Melanie were hit. h/t abc7chicago

Police say the shootings appear to be mostly gang-related.