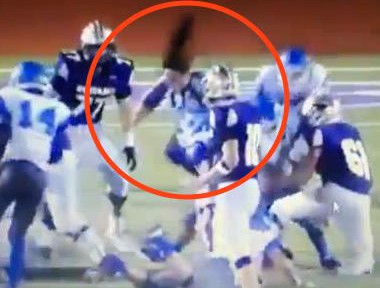 The world was quick to blame a pair of high school football players for a brutal hit on a referee during a game, but it has now been revealed, it was actually their coach who ordered the hit.

The incident happened during a San Antonio high school football game. John Jay High School assistant coach Mack Breed has admitted to ordering the hit. He has since resigned. According to ESPN.com’s John Barr, the secondary coach decided to step down from his post rather than take part in a University Interscholastic League hearing. As seen in this GIF courtesy of Vice Sports, 15-year-old Victor Rojas and 17-year-old Michael Moreno blindsided an official during a Sept. 4 contest: The players were suspended from John Jay High School after the incident and later said in an interview with Good Morning America that a coach told them to hit the referee after he allegedly made racist comments as well as poor calls, per Dan Good of ABC News. According to Barr, John Jay High School principal Robert Harris claimed Breed admitted to head football coach Gary Gutierrez that he was responsible for the incident.

Rojas and Moreno were informed Wednesday that they will be allowed to return to John Jay High School on Jan. 15, per Barr.

They won’t be allowed play football again this season, although it hasn’t yet been determined if Rojas—a sophomore—will be allowed to resume playing next year.