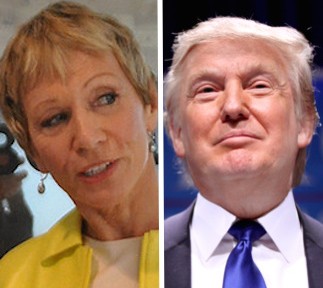 Barbara Corcoran from Shark Tank is not slicing or dicing any of her words when it comes down to who she thinks would win in a bid to become the GOP’s chosen candidate.

Leaving a West Hollywood eatery, Barbara told a TMZ photog that Mark Cuban would “crush” Donald Trump if he should decide to enter the race for president. Mark Cuban already has some impressive backing if he chooses to run for President … his “Shark Tank” co-star Barbara Corcoran. Barbara was leaving Soho House in West Hollywood Friday night when our photog asked about Cuban’s bold statement that he’d “crush” Donald Trump if he entered the race. Barbara agrees, and gets specific on the qualities that would make Mark an awesome Prez. tmz

Cuban has already displayed his skills at being commander and chief after playing the president in the latest Sharknado sequel. Let’s hope Barbara is not factoring in Cuban’s acting chops in making her determination!