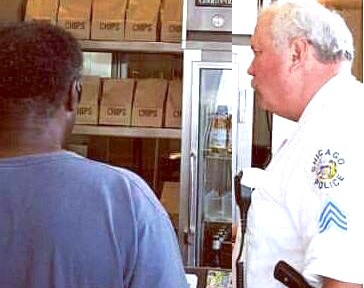 A Chicago cop is getting big snaps an image surfaced on social media showing him buying a homeless man Chipotle.

Chicago police officer Sergeant B. Hagarty, a 35-year veteran of the force, was captured on camera buying Chipotle for a homeless man. Hagarty was buying himself a meal in the Mexican eatery when he noticed the man going through the trash bins outside. The Chicago Police Department posted the story to its Facebook page, which has been shared over 84,000 times. Hagarty said that doesn’t think he did anything out of the ordinary, but he’s being praised for his kindness.