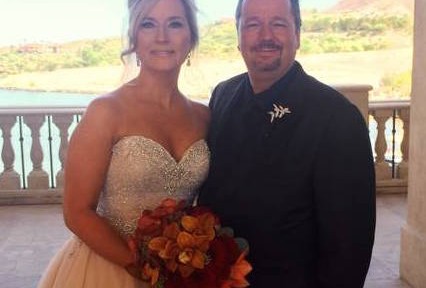 Winner of America’s Got Talent, Ventriloquist, Terry Fator got married on a whim in a surprise ceremony.

Fator, 50 and his new wife, Angie Fiore exchanged vows “on an impulse” in a spur-of-the-moment Las Vegas wedding. “Nobody knew, and afterward they couldn’t believe it,” Terry told Robin Leach hours after the Lake Las Vegas Hilton chapel ceremony Thursday afternoon. “We didn’t even have time to prepare our vows, so we improvised as we went along with the ceremony,” the ventriloquist added. Fiore saying “I would have been shocked if you’d told me 6 months ago I was going to marry the most wonderful man on Earth, but it has happened.” The Dallas catering events chef had less than 48 hours to find a gown. h/t lasvegassun

You may remember, Fator’s last wife who appeared with him on America’s Got Talent, but she was promptly ditched after Fator won a $100M Las Vegas performance contract.