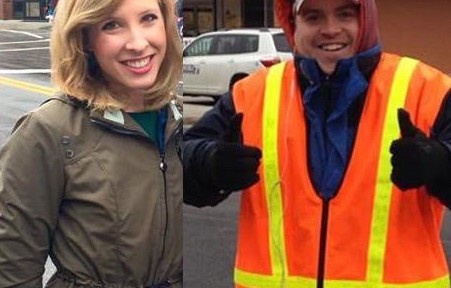 Excerpts from the manifesto of Vester Lee Flanagan, aka Bryce Williams via ABC News:

A man claiming to be Bryce Williams called ABC News over the last few weeks, saying he wanted to pitch a story, and wanted to fax information. He never told ABC News what the story was. This morning, a fax was in the machine (time stamped 8:26 a.m.) almost two hours after the shooting. A little after 10 a.m., he called again, and introduced himself as Bryce, but also said his legal name was Vester Lee Flanagan, and that he shot two people this morning. While on the phone, he said authorities are “after me,” and “all over the place.” He hung up. ABC News contacted the authorities immediately and provided them with the fax.

In the 23-page document faxed to ABC News, the writer says “MY NAME IS BRYCE WILLIAMS” and his legal name is Vester Lee Flanagan II” He writes what triggered today’s carnage was his reaction to the racism of the Charleston church shooting:

“What sent me over the top was the church shooting. And my hollow point bullets have the victims’ initials on them.”

Later in the manifesto, the writer quotes the Virginia Tech mass killer, Seung Hui Cho, and calls him “his boy,” and expresses admiration for the Columbine High School killers. “Also, I was influenced by Seung–Hui Cho. That’s my boy right there. He got NEARLY double the amount that Eric Harris and Dylann Klebold got…just sayin’.

In an often rambling letter to the authorities, and family and friends, he writes of a long list of grievances. In one part of the document, Williams calls it a “Suicide Note for Friends and Family”.