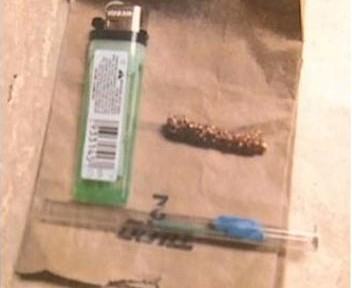 Read the following and tell us, do you think cops are going to far? Or do you think it’s about time? Comment below! Detroit police are aggressively trying to stop the sale of heroin in the city of Detroit for a second straight day.

Police say gas station owner Mike Ajami wasn’t actually selling drugs, they say he was selling drug set up kits with a glass pipe, steel wool and lighter rolled up in a brown bag for $5.

On  Wednesday police shut down a Sunoco gas station on Eight Mile as Chief James Craig and the owner had words on camera.

“They were for sale,” Craig said. “Out in a rolled up bag. The people using illegal drugs come in knowing they can get a set up or a brown bag.”

Watching Craig signing and slapping a yellow business closure sign out front, owner Mike Ajami says it’s not fair for him to be singled out.

“Go down (Eight Mile) or anywhere. Everybody is selling that.” If everyone else is doing it, Erika Erickson went to check it out.

“Everybody else is doing it, I’m not doing it,” said Mark Arabo, the owner of a nearby liquor store. “That’s dumb. You don’t do stuff like that. It’s already hard to make a living, you going to make it that way?”

A second store was checked out and no set up kits were found. The clerk explained that they are illegal.

“We believe the action today is going to be a deterrent,” Craig said. “If they are operating outside of the law, they should know we’re coming.”

Some neighbors didn’t enjoy watching Ajami forced to walk away from his store.

“For you to sit here and shut a guy’s business down,” said David, a customer. “It doesn’t make sense.”

“Just bags alone isn’t a reason to close a business that sells food to the community,” said J.T., another frustrated customer.

But plenty of others say that you have to start somewhere.

“They have to get drugs off the street,” said John, a neighbor. “So if Detroit police have to shut down an establishment, it’s a plus.”

Craig said he will continue to target party stores and gas stations helped in large part, by tips from the community.