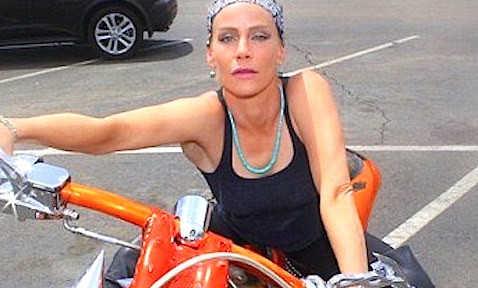 Amanda Peterson in her final photoshoot depict the fallen actress dressed as a sexy biker chick sitting on a motorcycle, in a sports car and even holding a live snake.

Peterson, who starred with Patrick Dempsey in 80s flick ‘Can’t Buy Me Love’ was found dead at her Colorado apartment on Sunday. She was 43. These photos, obtained by The Daily Mail Online and believed to be the last professional shoot Peterson took part in, were taken in 2012, showing the former 80’s bombshell in thigh-high leather boots posing with a snake and in different custom cars. In the grungy images, the mother-of-two is all-but unrecognizable to fresh-faced Cindy Mancini, the Arizona cheerleader she played in 1987’s ‘Can’t Buy Me Love’ – a role that would make her a superstar. h/t dailymail

Police do not suspect foul play but fell short of saying exactly how she died.