A semi truck carrying a load of 2,200 piglets overturned in Greene County, Ohio, Monday night closing all lanes of the highway.

Dispatchers estimate at least 200-300 pigs were killed in the crash while another 1,500 were captured. 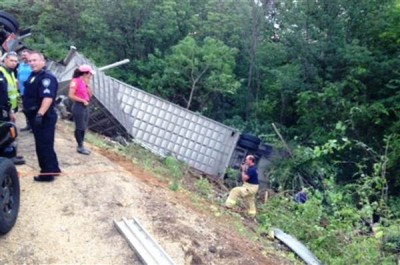 There are multiple fire departments and law enforcement agencies on the scene as well as park rangers and farmers who worked to corral the pigs. A company from Cleveland is driving down to pick them up. Police say the truck was on the west bound ramp when he lost control and veered into a guardrail. There were two people travelling in the truck. The passenger suffered a minor injury and was removed to the hospital for treatment. The truck was enroute from South Carolina to Indiana. h/t wdtn

Local authorities are asking residences to keep on the lookout for piglets in their yard.