Golf Balls Said The Queen, If I Had Two I’d Be King

A North Carolina man posted what could be the saddest Craigslist ad ever, selling his golf clubs because his new wife won’t let him play anymore.

Tim K. in Wilmington is selling his beloved clubs after his wife laid down the law, no more fun now that you’re a married man. 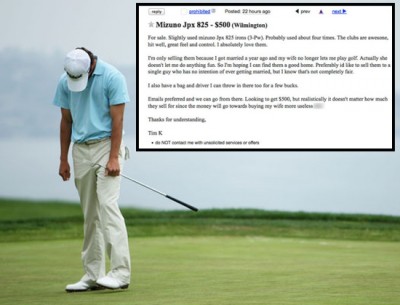 “The clubs are awesome, hit well, great feel and control,” he said. He goes on to say he wants to sell them to a “single guy who has no intention of ever getting married.”h/t myfox8

To ad insult to injury, the man’s pathetic ad made its way to the Golf Channel who described him as “the world’s saddest man.”