Elizabeth Sullivan, a Fort Worth, Texas woman celebrating her 104th birthday is touting her regiment of drinking 3 Dr. Pepper soft drinks a day as her fountain of youth.

Sullivan started drinking the sparkling beverage, which is known for its trademark for 23-flavors, when she was in her 60’s. 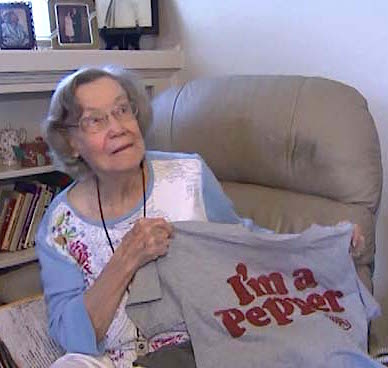 “I started drinking them about 40 years ago; three a day. Every doctor that sees me says they’ll kill you. But they die and I don’t, so they must be a mistake somewhere,” Sullivan said. “Well at 103 I didn’t think I’d make it but I’m still perking along,” said Sullivan. “People try to give me coffee for breakfast; well I’d rather have a Doctor Pepper,” Sullivan said.

For her birthday, she received a very big surprise; a beautiful cake shaped like Dr. Pepper and cases of the soft drink.

Sullivan has not only outlived most of her doctors, she’s also outlived her own daughter.

“Nobody’s going to believe all this stuff; I wish my daughter were here,” Sullivan said.