This Is The Man NFL Ref Referred To As JUNGLE BOY

Those pesky open mics! The latest victim of the dreaded glitch was NFL referee Ed Hochuli who called a fellow official “jungle boy” while broadcasting to 70,000 fans attending the game.

The ripe for viral mishap happened during the NFC Wild Card game between the Arizona Cardinals and Carolina Panthers. 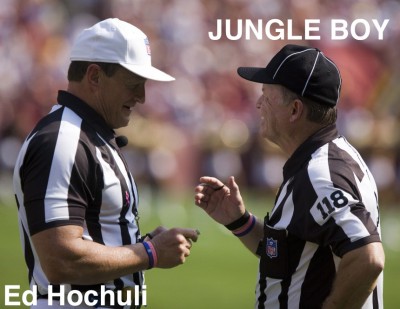 During a third quarter Hochuli announced that he “got the call from Jungle Boy that [it] was a good call.” h/t usatoday

So who is this mysterious Jungle Boy? Turns out it’s a nickname for replay Official Tom Sifferman.

“Ed Hochuli was referring to replay official Tom Sifferman when his comment that “jungle boy” confirmed the penalty for 12-men on the field was audible on the in-stadium microphone.  Hochuli intended to communicate that information to the officiating crew through the official-to-official communications system, but inadvertently broadcast the remark on the stadium microphone.  Sifferman, a long-time field judge on Hochuli’s crew before becoming a replay official, is nicknamed “jungle boy” by members of the crew for touring a jungle on a trip to Hawaii.”