A Pennsylvanian Marine veteran who has been diagnosed with Post Traumatic Stress Disorder is accused of shooting and killing six people including his ex-wife Monday.

Bradley W. Stone, 35, of Pennsburg, is still on the run and is considered armed and dangerous. 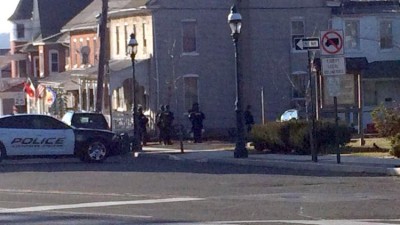 Police describe the Pennsylvania shooting suspect as 5’10” tall with a weight of about 195 pounds. He sometimes walks with aid of a cane or walker and may be wearing military fatigues. The shooting suspect, a resident of Pennsburg, Pennsylvania, has an auburn beard and closely cropped hair. h/t inquisitr

Authorities warn anyone in the area to call 911 if they believe they have spotted Stone, but under no circumstances should anyone approach the armed shooter.