Candy Crowley OUT AT CNN

CNN anchor Candy Crowley is leaving the network, according to an email sent by network honcho Jeff Zucker.

Read the email below: 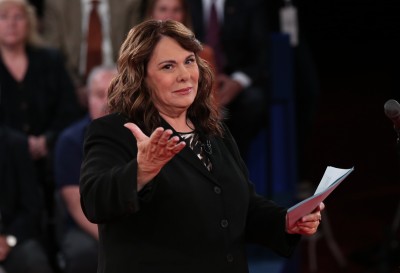 In her 27 years at CNN, Candy Crowley has been one of the most important and impactful journalists on our air. Since she joined us in 1987, her assignments have taken her to all 50 states, covering a broad range of political stories, including presidential, congressional and gubernatorial races. Candy made her mark covering the presidential campaigns of Pat Buchanan, George H.W. Bush, George W. Bush, Bill Clinton, Hillary Clinton, Howard Dean, Bob Dole, Jesse Jackson, Edward Kennedy, John Kerry, Barack Obama, Ronald Reagan and Mitt Romney. And as we all remember, she made her mark yet again in 2012 when she became the first woman to moderate a presidential debate in 20 years.

To say she lives and breathes politics is more than an understatement. She has an innate ability to sense its nuance, push its limits, and ask questions that others won’t. She is beloved in Washington even by those that she so skillfully takes to task on Sunday mornings. And she’s an award-winning journalist – taking home everything from a Peabody and Emmys to an Edward R. Murrow award. She is a television news icon.

Thus, it is with mixed emotions, that I wanted to let you know that Candy has let us know that she has made the decision to move on, so she can embark on the next chapter of her already prolific career. As difficult as it is for us to imagine CNN without Candy, we know that she comes to this decision thoughtfully, and she has our full support. There will be more time in the weeks ahead for all of you who have been lucky enough to work with Candy to share your own thanks for all she has done. But for now, on behalf of everyone at CNN, I want to extend my sincere gratitude and appreciation.