Girl Sent Home From School Over THIS HAIRDO

Teenagers are known for experimenting with their looks. Many young people wear the latest fashion to make their statement, while others use makeup and edgy hairstyles.

Maegan Galloway, a freshman at Bleckley County High School in Macon, Georgia, changing her hair had some unexpected consequences. 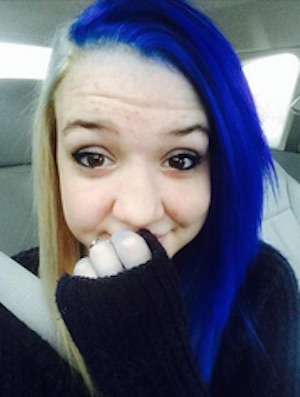 When school administrators spotted her new blue ‘do, they were unhappy about it. The assistant principal approached Galloway during lunch. “She said my hair was too distracting and I need to change it back,” Galloway told reporters in a telephone interview. She was sent home with orders to dye her hair a more natural hue. Galloway says that would seriously damage her strands. Principal Trey Belflower told reporters that the student is not officially suspended, but declined to discuss Galloway’s case in detail. h/t opposingviews

Galloway’s friends and sister took to Twitter to protest the school’s action and started the hashtag #SaveTheBlue and encouraged students to wear blue in order to support Galloway.

The student hopes to return to school soon, but is inspired by her supporters.

“The support has been overwhelming,” said Galloway. “It’s been great. I didn’t think that many people knew who I was.”