L.A.P.D. are searching for four men in a late model BMW who mugged a woman outside a store in Hancock Park.

The men, who were caught on a security camera, held the 69-year-old down and cut her Rolex watch and other valuables from her body – all in broad daylight. 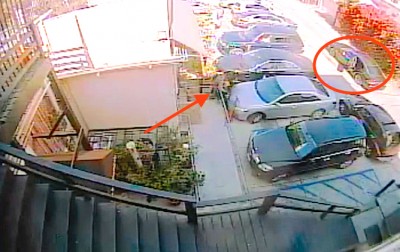 The brazen attack, which occurred about 12:45 p.m. Oct. 30, was captured on surveillance video, which was released Thursday by the LAPD in attempt to track down the robbers. The footage shows the woman getting out her car in an alley behind a series of shops on La Brea Avenue near 4th Street. As she begins walking toward the stores, a black four-door BMW pulls up behind her and three men jump out and surround her. Two of the men hold her down, while the third cuts the woman’s Rolex watch and a gold bracelet off her wrist. h/t latimes

The video also shows a brave valet attendant who attempted to stop the men from driving off.

The woman was not seriously injured but did suffer some cuts to her arm.