Synagogue To Roll Out Red Carpet For Joan Rivers Funeral 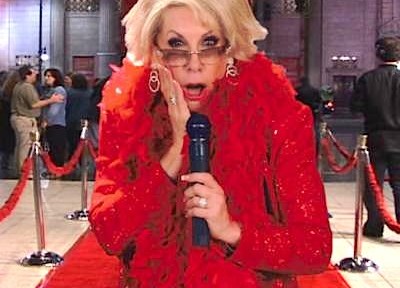 Guests will be invited to walk on the red carpet as they enter the synagogue to pay their respects. Rivers will then be buried with the carpet.

Rivers was put on life support last week after she went into cardiac arrest during an endoscopic procedure at an outpatient clinic, and died on Thursday. According to the medical examiner’s office, initial autopsy results were inconclusive; the NY State Health Department is reportedly investigating the clinic where her operation was held.
source

Apparently, Rivers suffered from a heart condition—on a 1985 episode of Good Morning America, she spoke of having a heart arrhythmia. “When you go under, say for plastic surgery or something like that, that’s when your heart can go out of kilter,” she told host Joan Lunden. “So I’m always very careful.”