Is Joel Embiid Officially A LAKER? His DELETED Tweet Said So!

Joel Embiid, tweeted and then deleted the following informative tweet!

He kept it simple.. 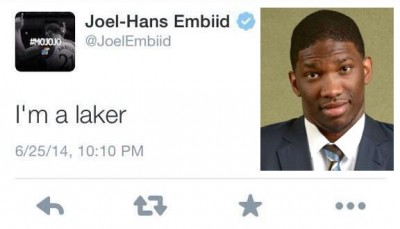 Four days after being lambasted by trolls for supporting Cristiano Ronaldo during the U.S.-Portugal World Cup game, the former Kansas Jayhawk is fending off more criticism over a deleted tweet that appeared on his account Thursday morning. source