Who Is Steve Ballmer? And Is He Buying The Clippers?

Steve Ballmer is a former Microsoft chief executive who won a frenetic bidding war for ownership of the Los Angeles Clippers, with his $2-billion offer. 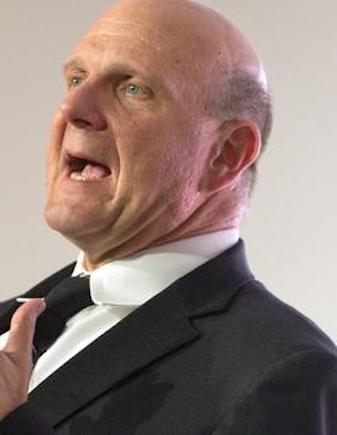 The offer sets a record price for an NBA team.

Ballmer was chief executive of Microsoft for 14 years and was just chosen over competitors that included Los Angeles-based investors Tony Ressler and Steve Karsh and a group that included David Geffen and executives from the Guggenheim Group, the Chicago-based owner of the Los Angeles Dodgers. source

A person with knowledge of the negotiations said the Geffen group bid $1.6 billion and Ressler at $1.2 billion.

TMZ is reporting the deal is close but not inked just yet..

Sources familiar with the negotiations tell us … Shelly Sterling is in a meeting now — at the time of this post — negotiating with Ballmer and several other prospective buyers who have made offers.We’re told Shelly is currently reviewing documents, but no agreement has been struck with anyone.Our sources say, however, a deal will be finalized by end of business Friday … and Ballmer is definitely in the running. tmz