Hundreds of copies of what is often regarded as the worst video game in history have been unearthed from a landfill site in the New Mexico desert in the United States.

Documentary filmmakers discovered the E.T. the Extra-Terrestrial cartridges in Alamogordo, about 320 kilometres south-east of Albuquerque. 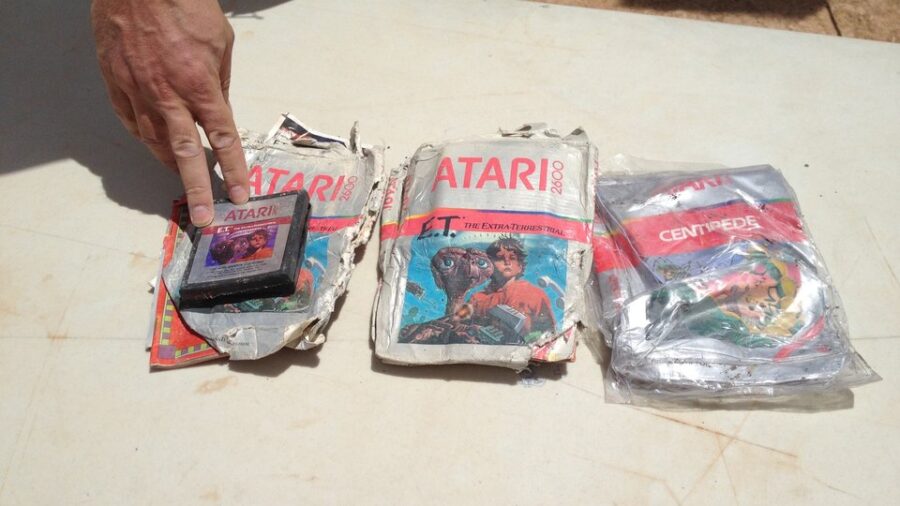 The failure of the ET game, based on Steven Spielberg’s film, was a major factor in the collapse of the game’s producer, Atari.

Some gamers speculated that thousands or even millions of the unwanted cartridges were buried in the area.

Who dumped the videos, how many they buried and why they did it inspired the dig and a documentary of the event by Microsoft Corp’s Xbox Entertainment Studios.

“For a lot of people, it’s something that they’ve wondered about and it’s been rumoured and talked about for 30 years, and they just want an answer,” the film’s director, Zak Penn, said.

When the game was first released in 1982 it retailed for about $US30. It now often sells on eBay for less than $US5.

“I don’t know how much people would pay for a broken ET game, but as a piece of history, it has a much different value,” Penn said. source

The first batch of games was discovered under layers of trash after about three hours of digging, a Microsoft spokeswoman said, putting to rest questions about whether the cartridges would be found at all.

She could not immediately provide an exact count of how many cartridges were uncovered.

Atari accounted for 80 per cent of the international video games market in the early 1980s, having created console versions of arcade classics like Asteroids and Space Invaders.

But E.T. the Extra-Terrestrial was a design and marketing failure after it was rushed out to coincide with the 1982 hit movie, and it contributed to a collapse of the video game industry in its early years.

Atari was believed to have been saddled with most of the 5 million game cartridges produced.

According to New York Times reports at the time, the game manufacturer buried the games in the New Mexico desert in the middle of the night.

A game enthusiast later tracked down the suspected burial site and spread the word about the location, Sam Claiborn, an editor at video game news site IGN, said.

The approximate size of the dig site measured 46 metres by 46 metres off Alamogordo’s main commercial street.