Writer, director, Michael Moore lost his dad on Saturday. He was 92. Moore sent this tribute to his fans via email. 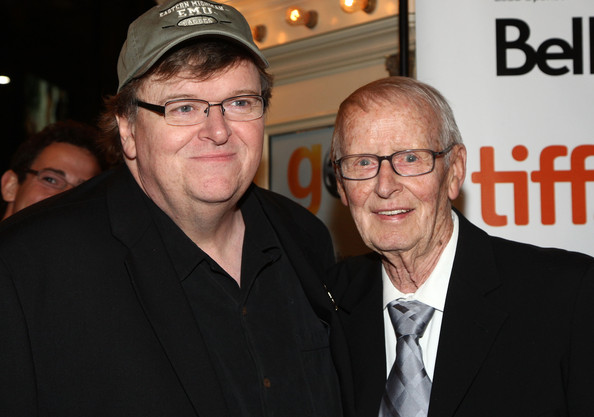 If you have a moment today, I hope you can read the below obituary for my father Francis (Frank) R. Moore, who died this past Saturday at the age of 92. He was a very special person in my life.

He was Frank to all who knew and loved him, and there were many. Born on August 23, 1921, in a working class neighborhood on the east side of Flint, the son of Herbert R. Moore and Mary ‘Molly’ (Connors) Moore. Both sides of the family originally came from Ireland – the last to arrive being his grandfather, William Connors and grandmother Mary (Hogan) Connors, both of whom hailed from County Cork. The entire family was not only proud of being Irish, they were also grateful for its gifts of humor, Catholicism and music (though not necessarily in that order). Frank’s father, Herb (1891-1970), was a Marine Corps. veteran of World War I and a printing pressman by trade. His mother, Molly (1891-1987), in addition to giving birth to their seven children, worked as a laundry maid, a clerk, and a “Rosie the Riveter” assembly line factory worker during the second world war. The Great Depression had a major impact on the family, as it did for most of the families on the east side. Frank’s brother-in-law, Lavern, was a participant in the Great Flint Sit Down Strike of 1936-37 which launched the United Auto Workers union. Frank was the fourth of seven children and was baptized and educated at St. Mary’s Parish in Flint. He was a member of the St. Mary’s High School 1939 Class C State Championship basketball team – and he and his team were inducted into the Greater Flint Sports Hall of Fame in 1999. He also played football and baseball for St. Mary’s, and once faced the legendary Hal Newhouser, getting St. Mary’s only hit off him.

Frank enlisted in the U.S. Marine Corps in 1942, became a member of the 1st Marine Corps Division, and was on the front lines throughout the most brutal battles of the South Pacific in World War II. After the war, he attended General Motors Institute on the G.I. Bill and worked for 35 years as assembly line worker at General Motors’ AC Spark Plug Division in Flint. He was a proud union member of UAW Local 651 and appreciated all that the union made possible for him and his family. Needless to say, it saddened him to see this way of life he and others fought so hard for taken away from the generations that came after him.

In 1950, Frank married Veronica Wall of Davison. They made their home in Davison where they raised a family of three children.  They were active members of St. John’s Catholic Church in Davison where, throughout the 1950s, Frank was the school’s football coach and in the 1960s was a cook at the weekly Friday Fish Fry. He was also a member of the St. Vincent DePaul Society where he worked with other men to assist the poor of the parish. He attended daily Mass at St. John’s and was much-beloved by parishioners who appreciated his good humor and kindness. He also, until he was 90, went each day to the parish gym to work out. He was most recently overjoyed with the selection of the new pope, Pope Francis I (and it didn’t hurt that the pope had chosen the name ”Francis” after his namesake, St. Francis of Assisi!). His faith was a cornerstone of his life and he lived by the golden rule, encouraging his children to “do good” for others. Frank and Veronica were married for 52 years until her passing in 2002. Frank was most proud of his children and grandchildren and their accomplishments, and he cherished who they were and the many, many years he had with them. They also loved him dearly and will never forget what he meant to them.

Frank’s fondest memories of Flint were going with his brothers to the Saturday night dances at the IMA, playing basketball and baseball for AC Spark Plug in the City League, working for Roosevelt’s WPA and the CCC, voting for his first time for Franklin Roosevelt, and being with his good friends Gene Rozyla and Bud Hillebrand. He also loved his adopted home of Davison, including the people he had morning coffee with at Archie’s, the guys he played golf with at Brookwood, and the parades that would pass by his house on Main Street. He liked meeting John Glenn, Mickey Rooney and Justin Verlander, walking the red carpet at the Academy Awards and at the Cannes Film Festival and watching Michigan and Michigan State make it to the Elite 8 in this year’s NCAA tournament.

Frank was proud of his country, but he also fiercely believed in peace. “Anyone” he would say, “who has seen war first-hand would not want to ever start one.” He supported those who worked for “the common man” and the “common good,” and he was thrilled to vote in the historic presidential election of 2008. On his 90th birthday, Frank moved near his daughter Veronica in California (he never expressed any regret at missing out on our exceptional Michigan winters). To the end, he greeted everyone each day with a smile, and he had simple hope that all would be well for the world. Those of us who loved him promised him that we would carry on with that hope – and him – in our hearts.

A Funeral Mass will be celebrated 11 AM Friday, April 25, 2014 at St. John the Evangelist Catholic Church, 404 N. Dayton St., Davison; Rev. Fr. Andrew A. Czajkowski celebrant. All are welcome. Burial will follow in St. John Catholic Cemetery, Davison. Visitation will be 2-4 and 6-8 PM Thursday at Allen Funeral Home, 9136 Davison Rd., Davison. There will be one hour of visitation prior to the Mass on Friday at the church. A Wake and Rosary will be held at 7 PM Thursday at the funeral home. Contributions may be made in Frank’s memory to Veterans for Peace Chapter 160 (assisting victims of Agent Orange in Vietnam) and the Flint Crossover Downtown Ministries (a progressive group providing aid to Flint’s poor).

Please share your thoughts with the family at Allen Funeral Home.