Justin Bieber‘s live-in buddy, Tyler The Creator, was arrested at the Austin Airport over allegedly inciting a riot at the SXSW festival earlier in the day. 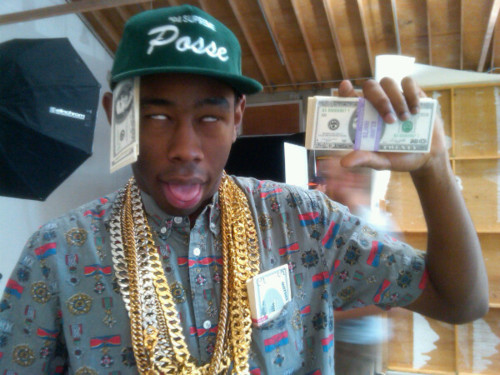 In a fan video released by TMZ, Tyler can be heard rallying concertgoers over the PA system to breakdown a barricade that was separating them from the stage. Fan can be heard chanting “push, push, push,” as they violently break a wooden structure open in a stampede towards the stage.

According to the warrant, a bartender working the area told police he tried to protect a woman from getting trampled upon, however, he received a punch to the face instead. At some point, Cops determined Tyler had “encouraged behavior causing an immediate danger and injury to persons,” but by that time, Tyler had scurried off to the airport to try and get out of dodge. He didn’t get out of dodge.

On a tragic note, Tyler’s concert was cancelled the night before, (trust us, that’s not the tragic part,) over a fellow aspiring rapper – who plowed through a crowd of SXSW festivalgoers, killing 2 and leaving 23 injured.