Kim Kardashian was paid $500K to be the ball “date” of Richard Lugner, an Austrian businessman, according to TMZ. The night didn’t go as planned after a random man approached Kim donning full blackface and doing his best Kanye West impersonation. Clearly agitated, the reality star then stormed out of the Vienna Ball, the joint hosting the ritzy event. 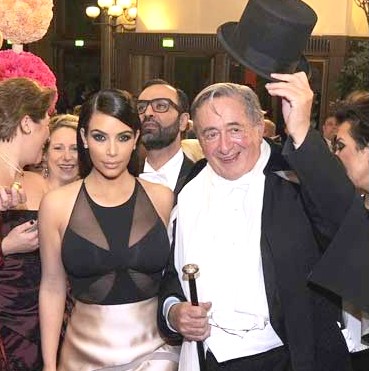 Lugner just did an interview trashing Kim for not sticking to the program, saying, “Kim is annoying me.”

But we’re told she was taking pics with Lugner when a guy who was working the ball came up to her … IN BLACK FACE acting like he was Kanye. She walked away from the guy, but had to stay another hour and a half.

The final straw. A short time later a guy came up to Kim and asked her to dance. She said she wasn’t a good dancer, and then the guy responded, he would dance with her if the orchestra played “N****rs in Vienna.”

Kim is telling folks that Lugner was aggressive and at times grabbed her and demanding she release her security. The inference being Lugner was trying to get her alone.

Of course there was an onslaught of cameras so expect to see the maylay caught on tape. Did we mention that Kim was also shooting for her reality show? Um, maybe we should have said that bit up front.