Michael Sam, the man who announced he was gay before getting drafted in the NFL, was captured dancing on a table, shirtless, in a gay bar.. 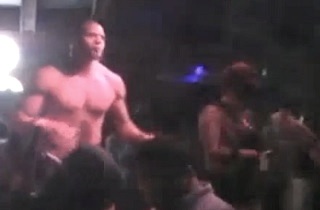 Sam made worldwide news, by virtue of his status as the likely first openly gay player in the National Football League. Before this week, however, he was already huge news in Missouri, and among college football fans, which makes it somewhat remarkable that video of Michael Sam dancing at a Missouri gay club is only now surfacing.