Marcus ‘Smart’ may need to change his name after stupidly shoving an elderly fan in the stands. 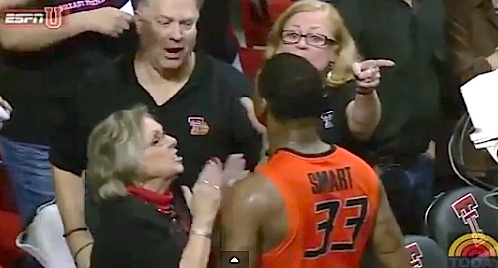 The Oklahoma State basketball star fell near an elderly couple during gameplay who were located in expensive, court-side seats. Translation, Smart may be looking for a new job soon..

UPDATE: The man who he pushed is Jeff Orr, according to ESPN, an air traffic controller from Waco, Tex. who travels thousands of miles each year to attend Texas Tech games. “We have never had an issue with [Orr] crossing the line in the past,” Texas Tech spokesperson Blayne Beal said after the game.