SWAT THIS! Melissa Gorga, Star of Real Housewives of New Jersey recently showed off her curves in a cute SWAT shirt. 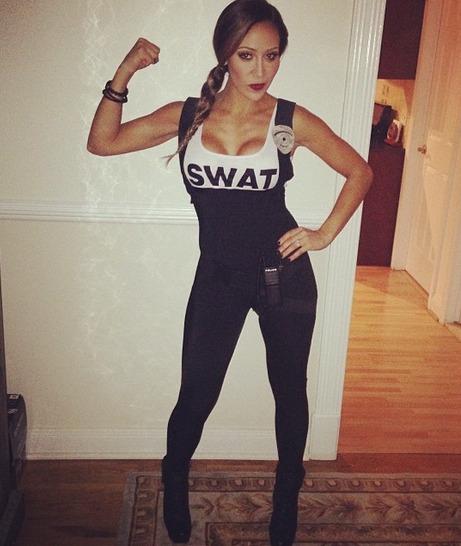 On January 23, Melissa posted an Instagram photo of herself decked out in cop attire, including the SWAT shirt, a police badge, a walkie-talkie, and some cute black leggings.

“S.W.A.T team came through last night;-) #dontask #youwillsee,” she captions the photo of herself. She is also putting her fist in the air in the pic.

Hmmm. So what do you think is the reason for Melissa’s costume? We’re not sure, although she’s definitely the sexiest law-enforcement officer we’ve seen in a while. We’re sure that plenty of people wouldn’t mind getting frisked by her.

Melissa seems to be getting the new year off to a good start in general. Indeed, reports say that Melissa and Teresa Giudice have been on good terms thus far throughout the current filming of Season 6. “Since they are filming, [Melissa and Teresa] have shockingly been getting along,” a source has revealed. Courtesy WetPaint.com.