Was Jacqueline Bisset high, a.k.a. drunk, when she accepted the trophy for Best Supporting Actress in a TV Movie or Miniseries at Sunday’s Golden Globe? 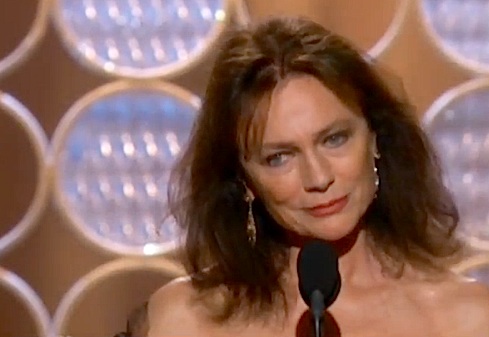 Winning for her work in “Dancing on the Edge,” the actress delivered an acceptance speech worthy of a blubbering idiot! A very beautiful, red headed idiot!

Fans of the actress also had some concerns..

hakunamattata437: This is a whole lot of crazy

Jeff Braune: She is still an attractive woman but something was not right. I’d say she had one too many.

Leah Varice: She’s drunk. Her hair was a mess. But congrats to her.

Dubya Bush: Google her, her hair always looks like that lol

phatmattcowboys: doubt she will win another award

I want you to kinow that Ms. Bisset was more beautiful then all noms in her day! A stunning lady. Still is! As for you fools who think she’s drunk you’re jealous period!!!!!!!!!!! She’s stunned and stunning! Eat that! To all you Ugly commentators, you will never be as beautiful as she. Later haters!