We are on the proverbial fence here at TheCount.com trying to deside if Miley Cyrus’ brand new Rolling Stone cover comes off as icky or sexy?

Now for a few excerpts from Miley’s interview for those of you who do something other than oogle the unsexiness.. It’s called reading.. Here we go. 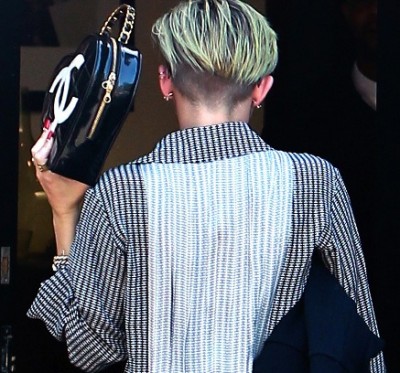 On Her VMAs Performance.

Miley thought there was a chance the network might pull the plug on her mid-performance, but she didn’t expect so much shock and vitriol. “Honestly, that was our MTV version,” she says. “We could have even gone further, but we didn’t. I thought that’s what the VMAs were all about! It’s not the Grammys or the Oscars. You’re not supposed to show up in a gown, Vanna White-style” – a little dig at Taylor Swift. “It’s supposed to be fun!”

“I wasn’t trying to be sexy. If I was trying to be sexy, I could have been sexy. I can dance a lot better than I was dancing.” She knows sticking her tongue out isn’t hot and that those weird stubby pigtails aren’t flattering (“I look like a little creature”). And she even knows it’s ridiculous for her to twerk. “People are like, ‘Miley thinks she’s a black girl, but she’s got the flattest ass ever,'” she says. “I’m like, I’m 108 pounds! I know! Now people expect me to come out and twerk with my tongue out all the time. I’ll probably never do that sh*t again.”

On Her deemed Racist Performance..

“I don’t keep my producers or dancers around ’cause it makes me look cool. Those aren’t my ‘accessories.’ They’re my homies.”

“When she’s being embarrassing, she’ll call me ‘sweet girl,'” Miley says. “When we were getting ready for the VMAs, I was about to put on my teddy-bear costume and she’s like, ‘Sweet girl, do you need to potty before you put your costume on?’ I’m like, ‘Mom! Kanye is standing right here!'”

On Her Breakup With Liam Hemsworth.

“Holy s**t!” Miley says. “That was awesome!” She calls her mom and tells her she’s alive. “One thing about skydiving,” she says, “you really know who you love, based on who you call.” I ask her if she talked to Liam already. “Oh, s**t!” she says, and takes her phone back out. (Two weeks later, the couple will announce their split.)

We stay until the club shuts down, and then some. Miley spends the whole night dancing on a banquette and drinking Malibu. Afterward, Cheyne orders a couple of Uber cars, and about a dozen of Miley’s friends pile in and head to their friend Ryan’s house in the Hollywood Hills.