DID SHE CHEAT? CUBA To FL SWIMMER Called Out By Pro Swimmers!

A 64-year-old woman who recently swam 110-miles from Cuba to Florida is being accused of cheating by fellow marathon swimmers who say the senior took a series of major shortcuts. 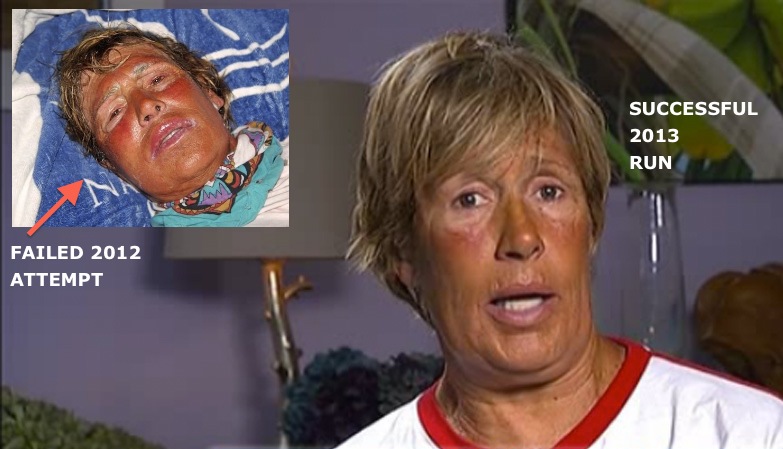 Diana Nyad was blasted on social media by an online community of Marathon Swimmers who think Nyad got a lift from the boat enlisted to tail her, by either getting in it or by being towed.. Citing a particularly speedy stretch of the elder’s swim, the pro swimmers say they also question whether she enlisted the use of a specialized mask and bodysuit.. A move they say wrongly protected the woman from the perils of jellyfish stings.

“When you know how hard it is, you kind of want those details,” said Andrew Malinak, a Seattle long-distance swimmer who crunched the data available from the GPS positions tracked on Nyad’s website and concluded that he didn’t trust what he saw.

Nyad and her posse are vehemently denying the charges by saying the swimmer was not aided by the follow boat, instead crediting the rapid part of her swim to a swift current.

Nyad did cop to wearing a full non-neoprene bodysuit, gloves, booties and a silicone mask, but only at night, claiming she removed the suit after successfully getting over the reef on her final approach to Key West.

Nyad has never been associated with the marathon swimming community so many Nyad supporters are writing off the swimmer’s assertions as a simple case of sour grapes..