I think it’s safe to say that most ‘N Sync fans were sorely disappointed by their super short appearance on MTV’s VMAs.. It was their first televised performance in a decade but the boy band’s most famous member could not find it in his heart to even finish a very condensed version of “Bye, Bye, Bye.” The truth is, the evening’s festivities were more about Timberlake’s Video Vanguard moonman than his long overdue reunion with his mates.. 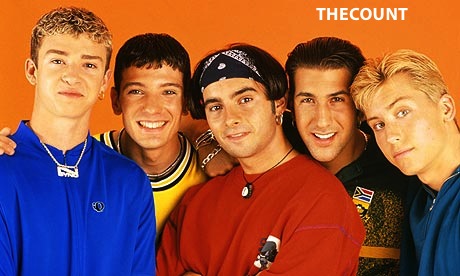 “They were pushing for more,” the source says. “While he was thrilled they could come for him, he didn’t want the reunion to be the whole thing. They originally were told that it was going to be more of their old hits, not just Bye Bye Bye — but then Justin reworked it.”

I doubt the guy will make a stink over Timberlakes ego driven performance, at least not in public..

“The guys wished it could have been more songs,” continues the insider. “He told them to trust him, he was going to make it great.” (During the show-stopping segment, Timberlake sang snippets of his solo hits “Take Back the Night,” “Sexy Back,” “My Love,” “Cry Me a River,” “Señorita,” “What Goes Around Comes Around” and “Rock Your Body” before his bandmates joined him for a few bars of “Gone” and “Girlfriend” before rocking out to “Bye, Bye, Bye.” After about two minutes, Fatone, Bass, Kirkpatrick and Chasez departed the stage, and Timberlake sang one final song.

Timberlake then acknowledged his pals while accepting his milestone award. “Half of the Moonmen I ever won, I won with [‘N Sync],” the singer said. “I’m going to share this with them.”