Accused NFL star, Aaron Hernandez appears for the first time in court since being arrested for murder.  The baller sat, cuffed and shackled, and seemed attentive.. Even smiling at times.. As he was escorted out, he mouthed, “I love you,” to a member of the audience.. 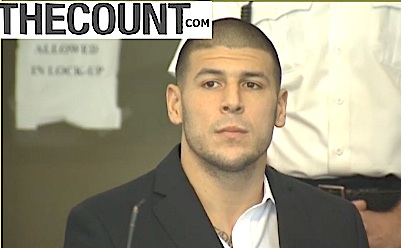 FALL RIVER, Mass. – A probable cause hearing planned for Thursday in the Aaron Hernandez case was delayed after the case was transferred from Attleboro District Court to Fall River Superior Court.

The move was prompted by an indictment of the former New England Patriots star, which was handed down Thursday in the murder case of Boston semi-pro football player Odin Lloyd.