A teenager who Tweeted a line from the P!nk song “Timebomb ” while on the way to the singer’s concert was stopped upon entering at the arena and arrested for posing a threat to the public!!! 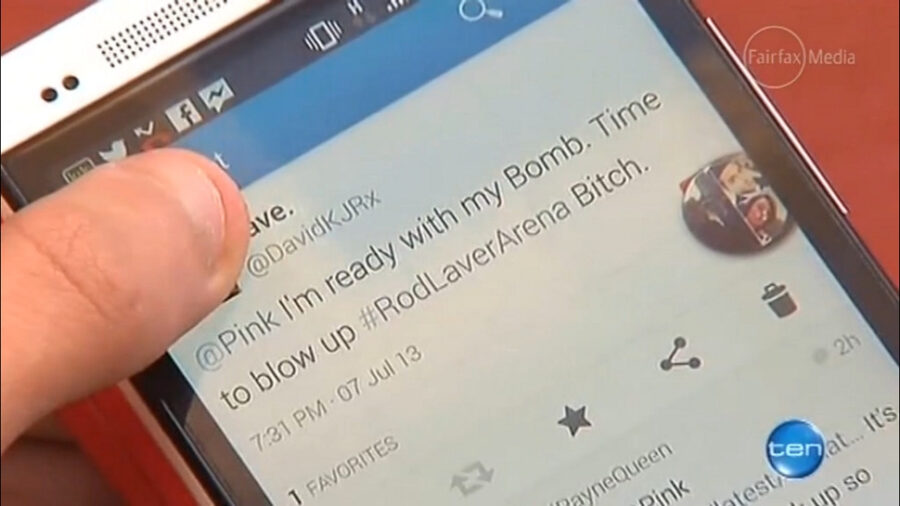 “I’m ready with my Bomb. Time to blow up #RodLaverArena. Bitch.”

The Nazis at the Rod Laver Arena in Melbourne, Australia, used the boy’s Twitter profile pic to track him down among the 12,000 who attended Sunday night’s concert and nabbed the little bugger!

“They just came up to me and showed a photo and said ‘is this you?,” Dave told Ten News. “I said yeah, because it was my face, and suddenly they just turned me around and grabbed my hands and forced me out the back.”

According to his dad, it was the Rod Laver Arena that pushed for the teen’s arrest on public nuisance charges! All for an innocent tweet!

“The policeman said to me, ‘if it was up to me, I would have booted him in the backside and said go home,'” David King told 3AW Radio. “But [the Rod Laver Arena] demanded [he] be arrested.”

A spokesperson for the arena is standing by the decision to forcefully eject the boy and have him thrown in jail.

“We can’t risk not taking matters like this seriously,” the spokesperson said. “Our security staff acted to ensure the area was secure and handed the matter over to the police.”

This is ridiculous! All the kid was doing was tweeting a lyric from a song! Where does this END people?