Shaq VS 2-year-old.. Daddy Shaq has never been a premere free throw shooter, however, when you hear that a big man is going to enter a shooting contest against a little man, as in a 2-year-old, you’re going to pick the NBA all-star every time. 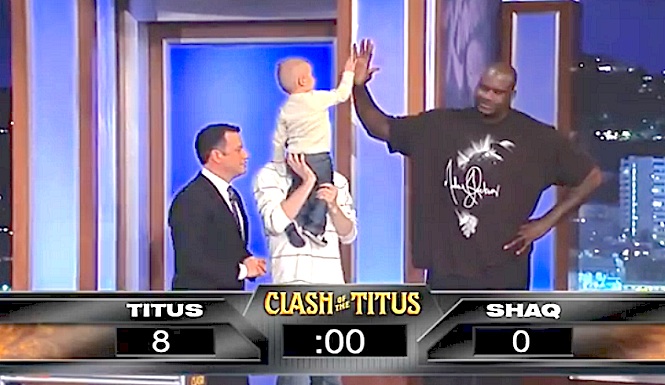 If you aren’t familiar with Titus’ incredible basketball skills you should check out his viral video, or maybe his commercial, or maybe his national television appearance on Jimmy Kimmel. Basically, Titus can’t miss.

Titus hit 8 shots in 30 seconds to put the pressure on the big man but Shaq was still confident that he could outscore Titus. But that’s not how things turned out.

Shaq was absolutely crushed by the 2-year-old as he went 0 for… well, 0 for a bunch of shots.

Shaq blamed Kimmel’s passing for his poor performance but anyone who watched the big man shoot during his playing days knows that the pass had nothing to do with it.

Here’s a video of Shaq and 2-year-old Titus competing in a shooting contest.