Mookie was traveling in a vehicle that was involved in a collision just after noon on Friday. The incident occurred near Tara Boulevard and Dixon Road in Clayton County, GA. The wreck involved a van and a car. 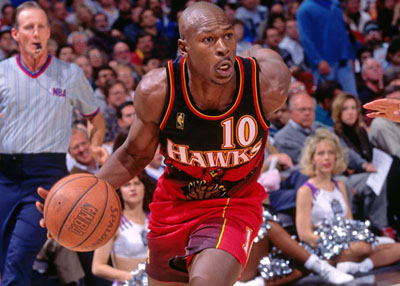 The car, driven by Blaylock, burst into flames on impact. The van was being driven by the woman, her identity is not yet released. Blaylock and one other woman were both airlifted to Atlanta Medical Center. She is in critical condition. Blaylock was drafted by the New Jersey Nets in 1989, then played for the Hawks from 1992-1999, closing out his NBA career with Golden State in 2002. In the mid 90’s he became one of a handful of NBA players to lead the league in steals in consecutive seasons.
More.

Blaylock has twin sons who played football at Walton High School in Marietta and are sophomores on the University of Kentucky team.