Arias off suicide watch.. But is it too soon? Just a short week after learning the devastating news, GUILTY! Murder ONE.. Jodi Arias has been removed from a special hold facility designed to prevent someone from taking their own life.. 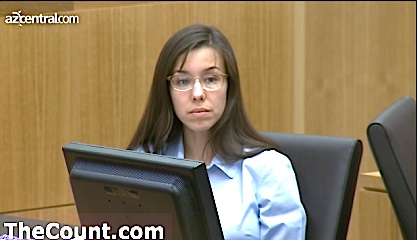 PHOENIX — Jodi Arias is off suicide watch, five days after she was placed in a psychiatric unit for saying she would rather die than spend her life in prison.

Arias, 32, was convicted last week of first-degree murder for killing her ex-boyfriend Travis Alexander. Hours after the verdict, she was placed under suicide watch for commenting in a television interview that she would prefer the death penalty.

She underwent a psychological evaluation at the Lower Buckeye Jail, which is routine for inmates under suicide watch. USATODAY.