A woman assumed she was her husband’s one and only, that is until she randomly friended someone suggested to her on Facebook.. That person ended up being her hubby’s second wife! The FB page even had a picture of the two-timer cutting the wedding cake! His other wedding cake! 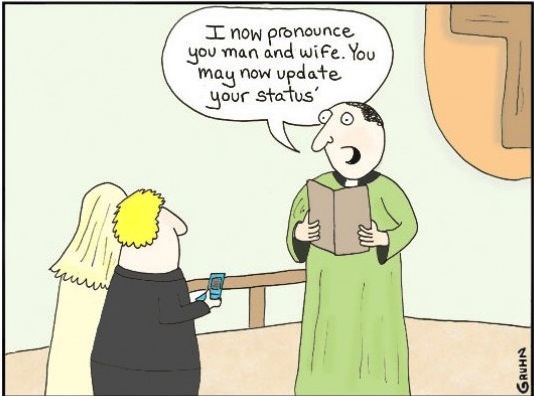 Talk about the shock of a lifetime! She was simply suggested a friend on Facebook and that “friend” ended up being her husband’s second wife! As it turns out, the first wife never officially divorced her husband.

“Wife No. 1 went to Wife No. 2’s page and saw a picture of her and her husband with a wedding cake,” Pierce County Prosecutor Mark Lindquist told the Associated Press. “An hour later the defendant arrived at [Wife No. 1’s] apartment and she asked him several times if they were divorced. The defendant said, ‘No, we are still married,'” court records showed. Alan L. O’Neill had married his first wife in 2001 but moved out eight years later without divorcing. Instead, he changed his name and remarried, making him a bigamist. O’Neill allegedly told Wife No. 1 not to tell anyone about his predicament and promised that he would fix it, but she instead told the police. O’Neill, formerly Alan Fulk, worked as a Pierce County corrections officer for five years. News of his illegal behavior led to him being placed on administrative leave and arrest. He was charged with bigamy and could face up to one year in jail if convicted; he remains free but will appear in court later this month. “Facebook is now a place where people discover things about each other they end up reporting to law enforcement,” Lindquist said. “Every few years we see one of these bigamy cases… about the only danger he [O’Neill] would pose is marrying a third woman.” The case has left the public in a state of amusement and surprise. “Think of how stupid this man had to be to not divorce the first wife, then marry another one and then put it ALL on Facebook for the world to see? People that stupid simply leave you speechless,” Beth Kissel commented on USA Today.