Instagram, sonogram, what’s the difference? They all serve as proof.. Kim Kardashian used the popular social media site to share this rare bare baby bump! Say that 10 times fast! I think it was wise for Kim to share this bare photo, at least she won’t get accused of faking her pregnancy, unlike some other people we know! BEY! 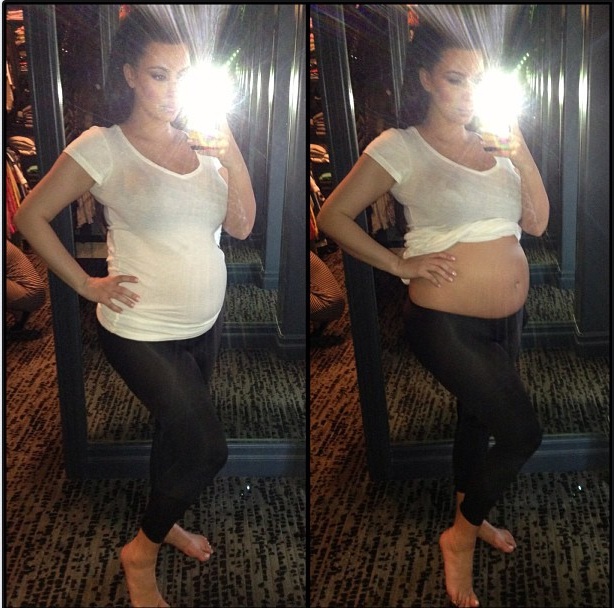 In a sort-of related note, Kanye West is said to have responded to Ray J’s new song, “I Hit That First, referring to his ex, Kim, by saying,

Ray J ‘Is Whack’ “Ray J is crazy” for releasing a song that overtly disses Kanye and Kim, a source close to the rapper tells HollywoodLife.com. Kanye is very upset over “I Hit It First,” which contains lyrics like, “Hit it from north/Brought her head down south/Now that I’m finished/She’s on to Mr. West.” He’s infuriated that Ray J would trudge up his and Kim’s sex tape from 2007 just to get a little attention. But the source assures us that Kanye sees the song for what it truly is — a publicity stunt. ”Kanye don’t condone broke ass, jealous [guys] who be trying to bite off he and Kim’s fame just to stay, wait, just to become relevant.”

Kanye West & Kim Kardashian Will Not Give Ray J Attention Even though Kanye’s fuming, the source states that Yeezy won’t be giving Ray J the attention he wants. So we should probably stop hoping for Kanye to release a diss track of his own (that battle wouldn’t even be fair). Instead, don’t expect much of a response from Kim and Kanye, as Ray J fades back into obscurity. “Tell him to call Ye when he gets to the $100-million mark,” our source concludes. “Cause guess what — Ye ‘hit that’ first.” Source.